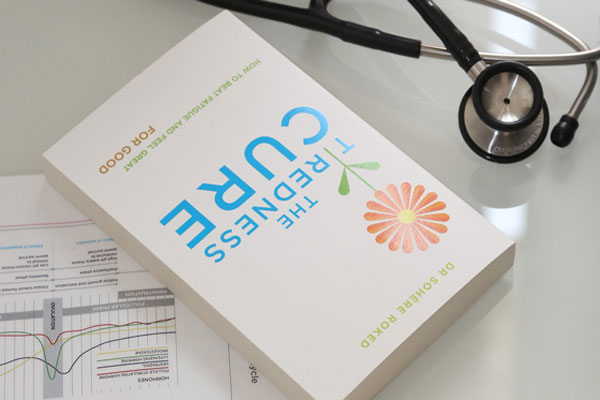 Why I hated the book I’d written

It’s been a year since my book ‘The Tiredness Cure’ came out. Most people would think that this is a cause for celebration….after all it’s been selling relatively well, I get emails from people who’ve read it and feedback from patients coming to see me who say they’ve found it inspirational and its generated some good publicity about holistic health and about my work.

However if I’m being completely honest, over the last year the book has felt like a noose around my neck. I haven’t felt proud, I’ve felt ashamed and a fraud and I haven’t been able to enjoy the achievement of writing a book at all, I would flinch whenever anyone asked if I’m writing a second book, and I’ve tried to run away from it as much as possible.

I wrote my book with the desire to help people, the same reason why I became a doctor. There wasn’t anything else like it around for the British public and I had a desire to share my knowledge and just try and make things better for people struggling with their health and not living their best life. I felt it was a great little book, written in my ‘easy to understand’ style, full of practical tips and covering everything from nutrition to meditation to supplements to hormones to exercise. Of course to be truthful I also hoped it would generate some good publicity for me too and establish me as an authority and my aid my career. It would be dishonest to say I wasn’t hoping for a bit of praise for my amazing concept and a little bit of ego-stroking. I didn’t expect Oprah to call me with congratulations, but I did expect….something big.

Even a year on I feel a slight sense of shame because of the backlash from the dairy community. I made a mistake and became ‘Most Hated’ with the UK dairy farmers who were positive I was launching an all-out war to put them out of business. I misquoted a reference I found and had wholeheartedly believed, as it is so widely reported in the nutrition community, about ‘pus cells’ and hormones in milk. However it turns out it’s an American stat not a British/European one. And I am not American, nor is my book published there. When writing my book, there were key areas that I thought might offend people, and had prepared what to do about a backlash for them, but the milk thing caught me totally off-guard! It’s really hard to make a mistake, but to make it so publicly via The Daily Mail is really painful. A tiny quote had been magnified completely and put my credibility at risk. If the book was read as a whole, people would have seen one of the key messages is to buy from local farmers, and to not completely cut out any type of food if you don’t have a problem with it. But that wasn’t made clear and obviously I took responsibility for the mishap. It was a dark time for me where articles were written about me in the Farmer’s Guardian, I received constant hate mail via social media and I stopped taking care of myself (doing pretty much the opposite of everything in the book!), I cancelled my book launch party, completely stopped writing and turned down a load of speaking events.

I would never intentionally try to hurt anyone or try and victimise a certain group of people. Most doctors don’t try and hurt people that way. I was trying to be authentic and got it wrong. I’m trying to be the most authentic person I can be and that includes admitting when I am wrong, scared or unhappy and saying sorry, as well as sharing my skills and being proud of all that I am – good and not as good.

I did a lot of ‘letting go’ of past baggage recently (but we’ll save that for another blog post!) and I’m finally willing to let this go too. I’m the author of The Tiredness Cure and I’m proud I’ve written a book which is good and I tried to contribute to the world and help people. If you haven’t read it you really should!

Here’s what I’ve learned over this last year:

1) People will be far more vicious to you over the internet than they ever would to your face (I assume) because they forget you are a person with feelings and insecurities, just like them.

2) If you want to go out and do anything in this world you’ll probably make some mistakes. A good friend of mine said at the time ‘at least you’re out there trying to contribute to the world ‘. That kept me going during tough times.

3) When being given a lot of different advice from different groups of people, it’s probably best to follow what feels most authentic and in keeping with your values, not the best “PR” line. Ultimately I was responsible so I had to step up and trust myself to get through it.

4) If you want to do anything in life, you have to get used to being embarrassed. I hope you’ll never be publicly embarrassed via a national newspaper and farming forums, leading to everyone you’ve ever known hearing about it, but still, it’s a good idea to get used to dealing with humiliation. Once you’re over it, nothing will ever phase you again and you’ll be out there taking risks and living life on a whole different level.

5) Don’t hide your light, the world will move on with or without you…..and you’ll wake up old (if you are lucky enough to make it to old age) and wonder where your life went and why you didn’t take more chances.

6) The hardest thing is to say you are sorry and admit a mistake, but it will liberate you to do so.

7) If you know you’re coming from a good place, then fear not, you will find a way around things to make it right again.

8) You know who your friends are when the sh*t hits the fan.

9) There’s no such thing as ‘you only get one chance’, you make chances in this life. If you feel you’ve blown a chance, work hard to create another.

10) My darling father – the only man so far in my life who has always been there for me and my hero – listened to me sob and panic down the phone one day about what’s going to happen if I get struck off and lose my career, and he calmly and patiently said, ‘when it happens, then we deal with it, until then let’s not worry about it’. That’s just good advice for everything in life. He should write a book, he’s also far better at attention to detail than I am….. 😉